Topic: This post is a hands-on introduction to using on-CPU Flame Graphs for investigating Oracle workloads. This technique is about collecting and visualizing sampled stack trace data to analyze and troubleshoot Oracle processes at the OS level (in particular applied to Linux).

Motivations: The techniques and tools described here can be used for performance investigations to complement wait-event based information gathered from the Oracle engine, such as information available with ASH and sql monitoring. They can also be used for complex troubleshooting when the wait interface is failing to instrument a particular problem under study. Last but not least they can be used as a learning aid to investigating Oracle internals.

Context and credits: The use of stack sampling has previously been covered for Oracle investigations by Tanel Poder in several articles (see Tanel's Advanced Oracle Troubleshooting Guide and for example this article).
Brendan Gregg has done original work on the collection and visualization of stack sampled data and by introducing the Flame Graphs visualization technique.
The techniques discussed in this post rely on perf for data collection. Perf is a relatively new addition to the performance tools available for Linux (requires kernel 2.6.31 or higher, for example RHEL6 or OL6). A few additional references on using perf for investigating Oracle are: Frits Hoogland, Kevin Closson, Craig Shallahamer.

This article: In this post we will approach the use of stack sampling with perf and visualization with Flame Graphs by introducing examples of growing complexities and by detailing the steps needed to reproduce the results. The main idea is to give a few hints of what this type of approach can do to help us analyze process execution and performance rather than producing a comprehensive guide.

In Figure 1 here below we can see a Flame Graph representation of the stack traces collected during the execution of "select count(*) from dba_source" (the details of how the graph was generated are described later in this article). 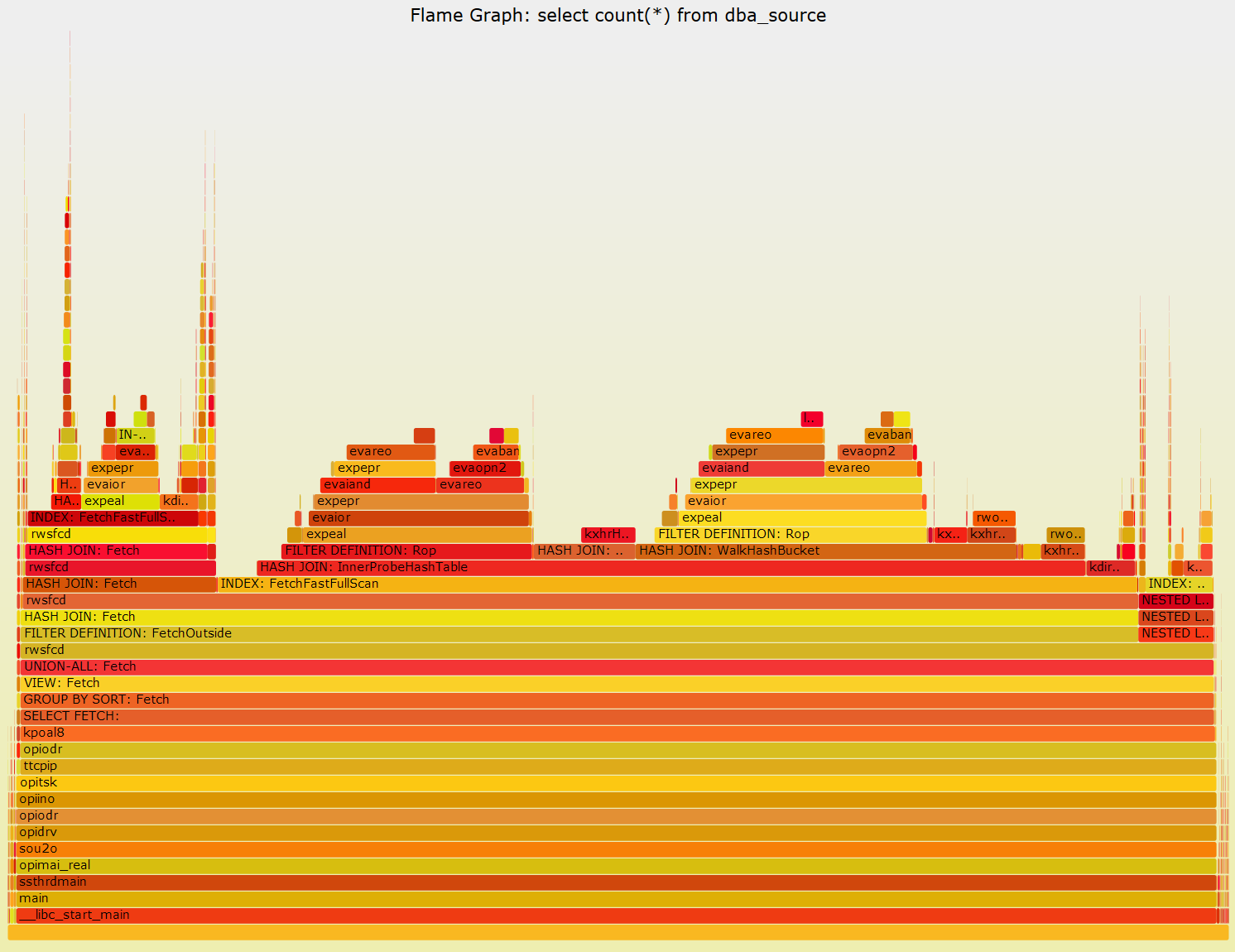 Figure 1: Flame Graph of "select count(*) from dba_source". See more details for each stack layer by hovering over the graph lines in the SVG version

The stack traces expose the name of many Oracle's internal functions. There is no public documentation of those internal functions, however much can be guessed by their name and from the documentation in the Oracle Support document "ORA-600 Lookup Error Categories" (formerly MOS note 175982.1, more recently found as an attachment to Note 1321720.1 and also in other links on the internet).
In addition to the support note, Tanel Poder has already done a great job of "decoding" an important class of internal functions, the rowsource functions with prefix qer (query execution rowsource) in his os_explain script. Rowsource functions expose execution plan details, similarly to what is exposed in ASH data (v$active_session_history) at the columns SQL_PLAN_OPERATION and SQL_PLAN_OPTIONS.
Note also that in Flame Graphs the horizontal axis is not time, stack traces are simply pasted by ordering alphabetically (follow this link to Brendan Gregg's article on Flame Graphs).

If we extract only the rowsource entries from the stack trace data represented in Figure 1, we obtain a simplified Flame Graph, which highlights the parts related to query's execution plan: Figure 2. We can recognize there the execution plan operations and how they stack and nest on top of each other. Although SQL is mainly a declarative language here we have a good view of how this is translated at run time into procedural execution: after all the Oracle query engine is just another (complex) C program.

Figure 2: Flame Graph of "select count(*) from dba_source" where the stack data has been filtered to show only rowsources. See more details for each stack layer by hovering over the graph lines in the SVG version

The interpretation of the stack samples of a relatively complex execution plan like this one can be challenging. In particular we want to match the measured stack traces with the execution plan operations. This becomes easier if we cross check the stack traces with the execution plan details, as show in Figure 3 for this query.
One subtle, but important point worth repeating is that horizontal axis in the Flame Graph is not time (Brendan Gregg's article on Flame Graphs). However the length of each line in the graph is proportional to the number of captured stack frames, therefore to its execution time. This last sentence may not be valid for a general  case but it holds for this example, as the whole query execution time was 'on-CPU' (see more on this later on when we discuss Flame Graphs for I/O-bound workload) 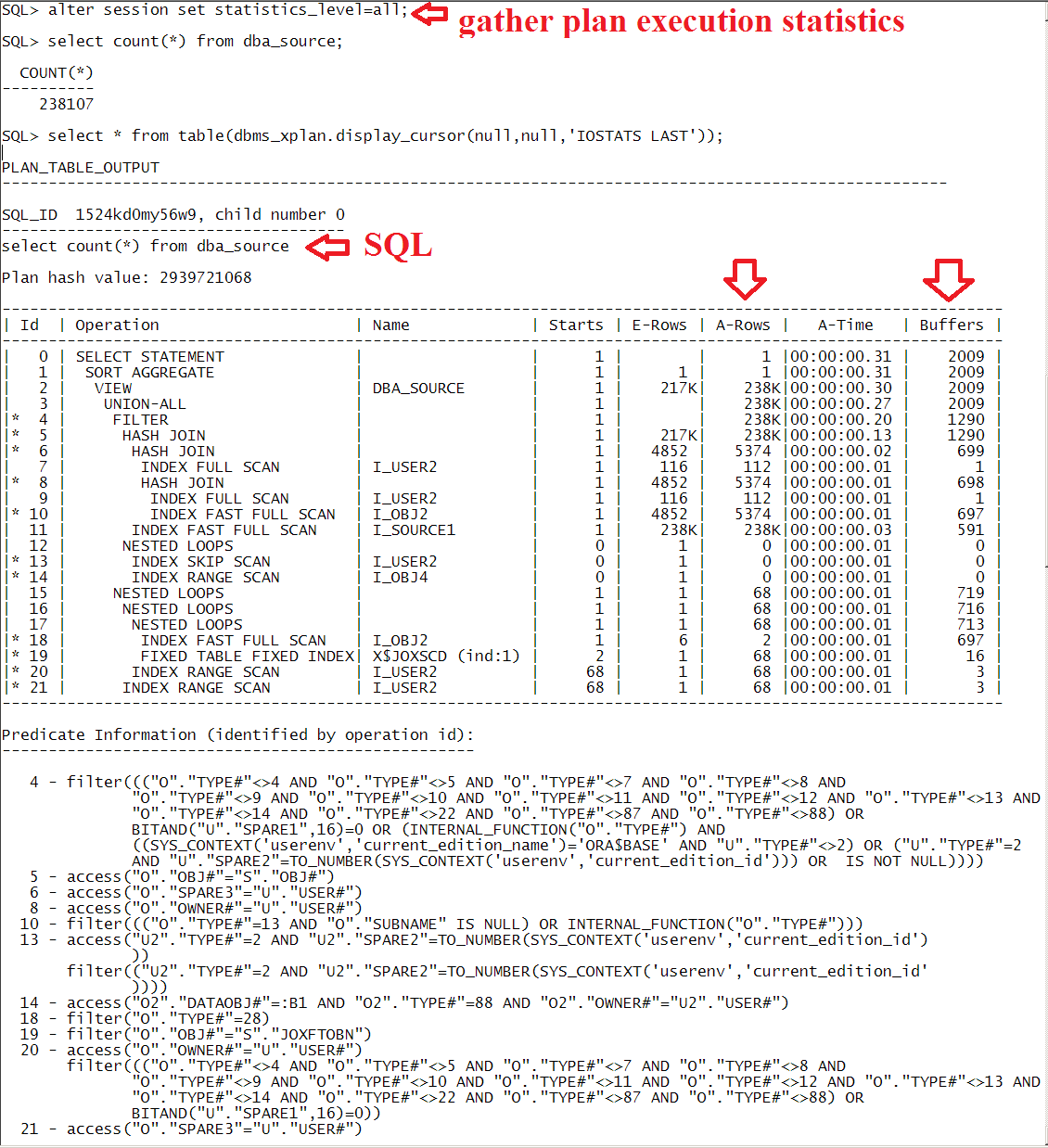 Figure 3: Execution plan and details of the rows processed by each step (Actual Rows, "A-Rows") and logical reads ("Buffers") for the query "select count(*) from dba_source" (Oracle version 11.2.0.3).

How the Flame Graphs of Figure 1 and Figure 2 have been generated
Tools: 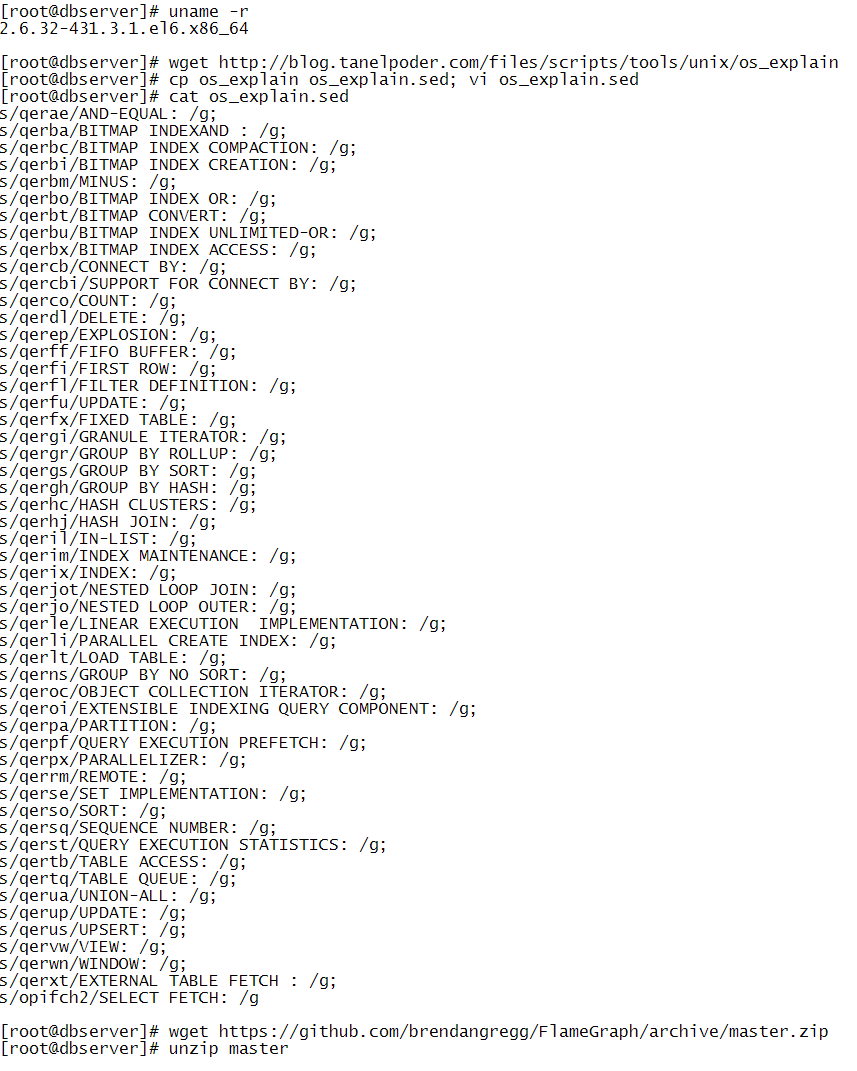 Steps for data processing and visualization:

In this example we trace CPU workload running from multiple sessions and generate on-CPU Flame Graphs. We use SLOB for logical IO testing to generate the CPU-bound workload, that is SLOB queries run with their entire data set in the buffer cache in this example. 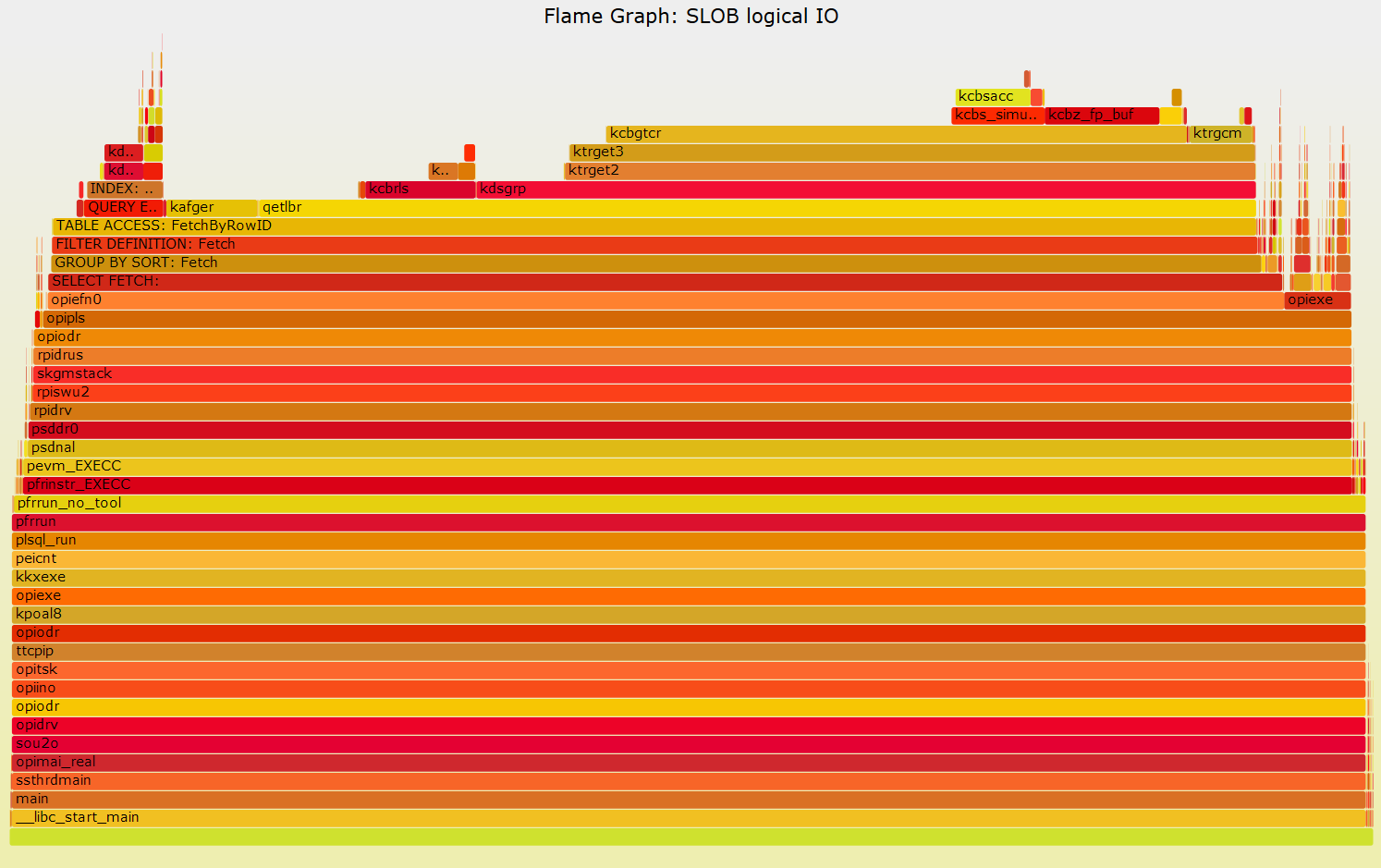 Similarly to what we discussed in the Example 1 above, we can now filter the stack traces to highlight the rowsource data. In addition in this example we also leave the details of the functions that start with the letter 'k', notably this includes the Oracle kernel function kcbgtcr (Kernel Cache Buffer Get Consistent Read).

Figure 5: Flame Graph of SLOB logical IO (8 concurrent sessions) where the stack data has been filtered to show only rowsource functions and functions stating with 'k'. See more details in the SVG version

We can correlate the rowsource execution steps as we see them in in Figure 5 with the execution plan of the SLOB test query reported here below (Figure 6).

Figure 6: Execution plan of the SLOB query used for the tests described in this article.

How the Flame Graphs 4 and 5 have been generated

We will use the same SLOB workload as example 2 but this time with a very small buffer cache therefore forcing the DB to do physical I/O to read SLOB data from the storage. Random I/O reads will be instrumented by Oracle with the db file sequential read wait event (see also this post for additional details and examples on testing random I/O with SLOB). 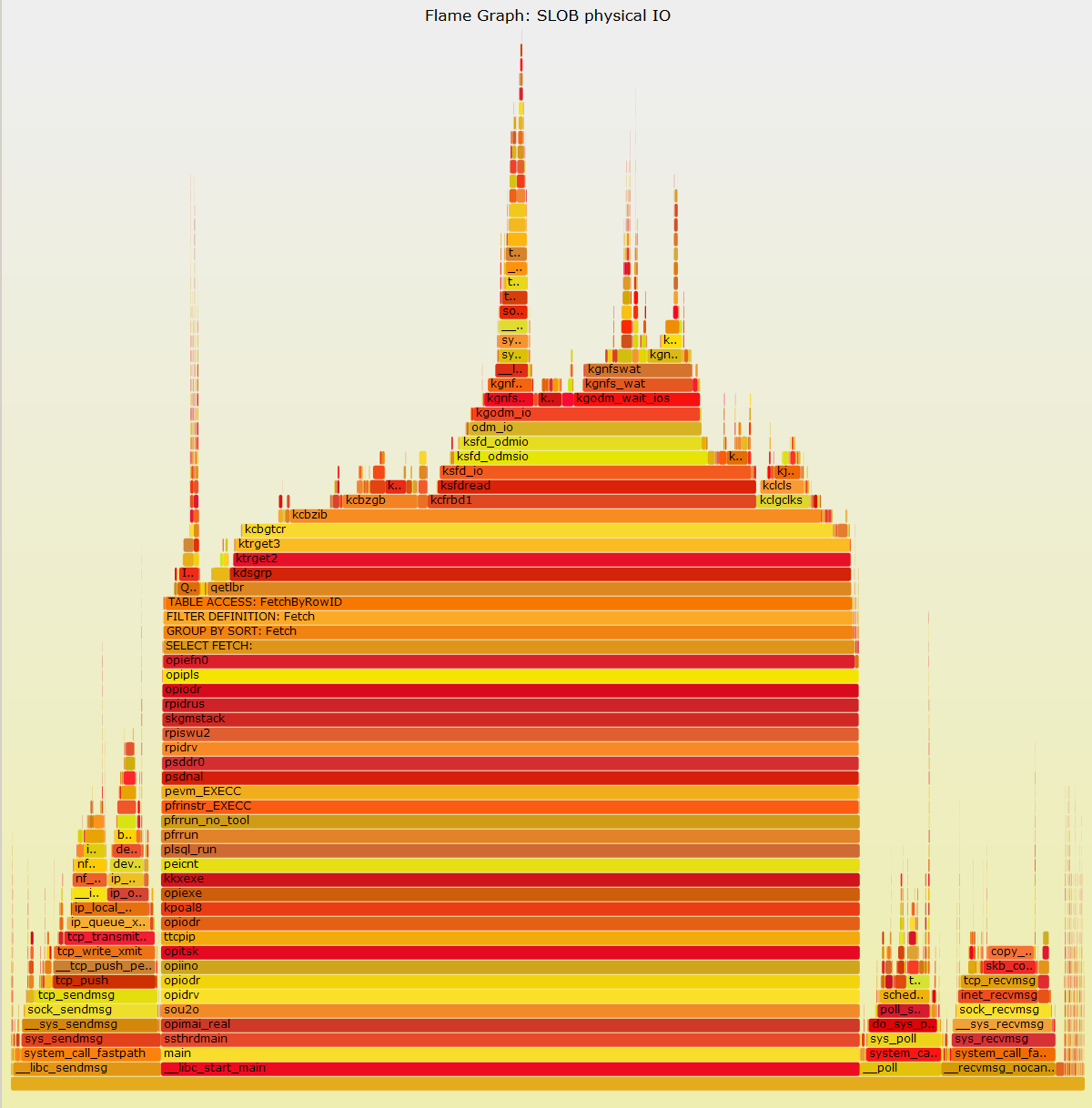 Figure 8: Flame Graph of SLOB physical IO (8 concurrent sessions) where the stack data has been filtered to show only rowsources and functions stating with 'k'. See more details by hovering over the graph lines in the SVG version

This example is about measuring and visualizing stack traces collected for on entire server. The interpretation becomes more complex as multiple workloads are measured together. Moreover system calls for I/O and other activities are measured as well.
Another important fact to take into consideration is the footprint of data collection. For this reason a reduced frequency of 99 HZ was used for sampling.

The steps for data visualization are the same as was used in Examples 2 and 3. Here below in Figure 9 the Flame Graph of the measured data and a 'filtered version' in Figure 10.

From the row source names reported in Figure 10 below we can guess what the workload on the server was, which types of operations were executed, with details on the queries, such as the access path used and on the type of DML. We can also measure which Oracle functions were executed for most of the CPU time. It's worth mentioning again that only on-CPU workload was captured. 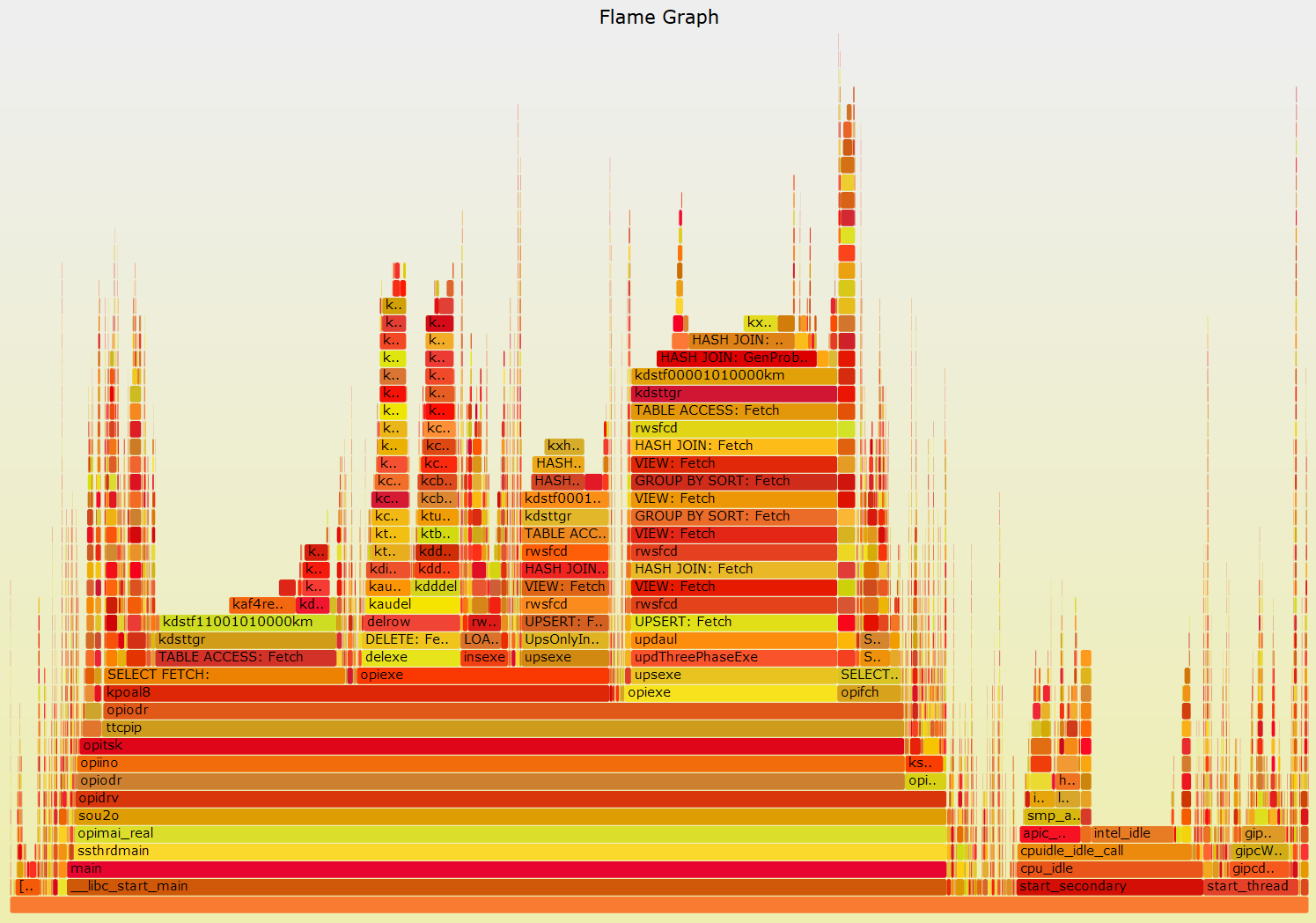 Figure 9: Flame Graph of the workload of an entire server for 20 seconds, stack traces sampled at 99 Hz. See more details in the SVG version 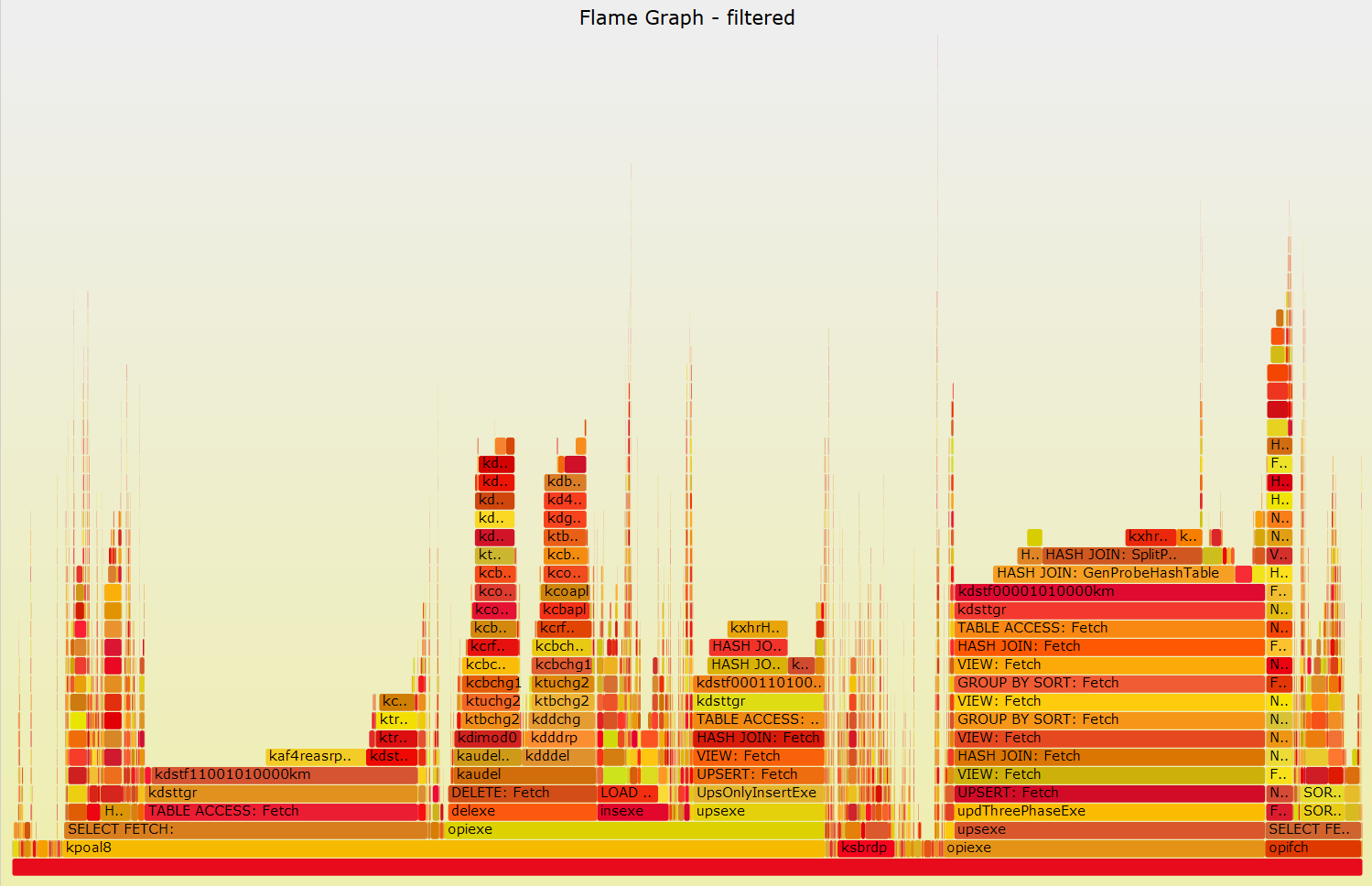 Figure 10: Flame Graph of the workload of an entire server for 20 seconds, stack traces sampled at 99 Hz. where the stack data has been filtered to show only rowsources + functions stating with 'k' or containing 'exe' in their name. See more details in the SVG version

High-frequency sampling stack traces is a powerful technique to investigate process execution at the OS level, in particular for CPU-bound processes. This technique can be successfully applied to the study of Oracle performance and complex troubleshooting. It can complement and in some cases supplement the information exposed by Oracle's V$ views and wait event interface in general. Flame graphs are a visualization technique introduced by Brendan Gregg to facilitate the analysis of sampled stack data. The analysis of stack traces for Oracle processes currently relies on the little information available on the Oracle Support document "ORA-600 Lookup Error Categories" (formerly MOS note 175982.1, more recently seen with note 1321720.1) and on the published work of experts who have approached this field and published their findings, notably Tanel Poder.
Much of the potential of these techniques is still untapped, we have covered in this article a few basic examples.
Additional resources on interpreting stack traces and on profiling Oracle rowsources and SQL execution can be found in Tanel's blog and Enkitec TV video and in Alexander Anokhin's blog. More info on the use of Flame Graphs can be found in Brendan Gregg's blog.