Topic: In this post you will find a short discussion and pointers to the code of a few sample scripts that I have written using Linux BPF/bcc and uprobes for Oracle tracing.

Tools for dynamic tracing are very useful for troubleshooting and internals investigations of Oracle workloads. Dynamic tracing probes on the OS/kernel, can be used to measure the details for I/O latency for example. Moreover probes on the Oracle userspace functions can be be used to complement Oracle instrumentation and probe deeper into the internals of the Oracle engine, when needed. For example in a work done in collaboration with Frits Hoogland we have investigated how to link Oracle wait event interface with tools able to probe the userspace, such as gdb and dynamic tracing tools as DTrace, SystemTap and Perf. More details and examples on this topic can be found in previous work: Modern Linux Tools for Oracle Troubleshooting (presentation at UKOUG Tech14), Life of an Oracle I/O: Tracing Logical and Physical I/O with SystemTap, Linux Perf Probes for Oracle Tracing, Flame Graphs for Oracle.

BPF together with his frontend bcc are new and exciting technologies in the Linux dynamic tracing ecosystem. If you are not familiar with them, you can get up to speed using the excellent material in Brendan Gregg's blog. While the tools are still in development as I write this, a large amount of important features are already available starting from kernel 4.5, notably the support for uprobes that I have used in the scripts discussed later in this post.

I have started experimenting with porting a few probes for the Oracle userspace that I had written using SystemTap and discussed in this blog. While the language/syntax is completely different between SystemTap and BPF/bcc, porting the probes has turned out to be relatively straightforward. The work has been made substantially easier by the availability of a large selection of well-written and documented scripts in the tools directory of bcc. At present writing BPF/bcc scripts is a mixture of coding in Python and C, which feels to me both familiar and at the same time strangely low-level compared to the more mature environments for example of DTrace and SystemTap.

The example scripts that I have written using BPF/bcc are on Github. Here is a list with comments:

An example of the usage of ora_wait_histogram.py to measure and display wait event latency:

PyLatencyMap is a command-line tool for visualizing latency histograms using heat maps on terminal graphics, using ANSI escape codes. PyLatencyMap can be used to investigate I/O performance for random I/O, especially suited for the cases of multiple modes of response time from the storage (SSD cache, HDD, latency outliers). The original idea for PyLatencyMap comes from the work of Brendan Gregg on latency heat maps. I have added to the PyLatencyMap repository a modified version of the biolatency.py script to measure I/O latency histograms: this is the link to the script pylatencymap_biolatency.py and an example of heat maps generated with PyLatencyMap with the script Example11_BPF-bcc_blockIO_latency.sh: 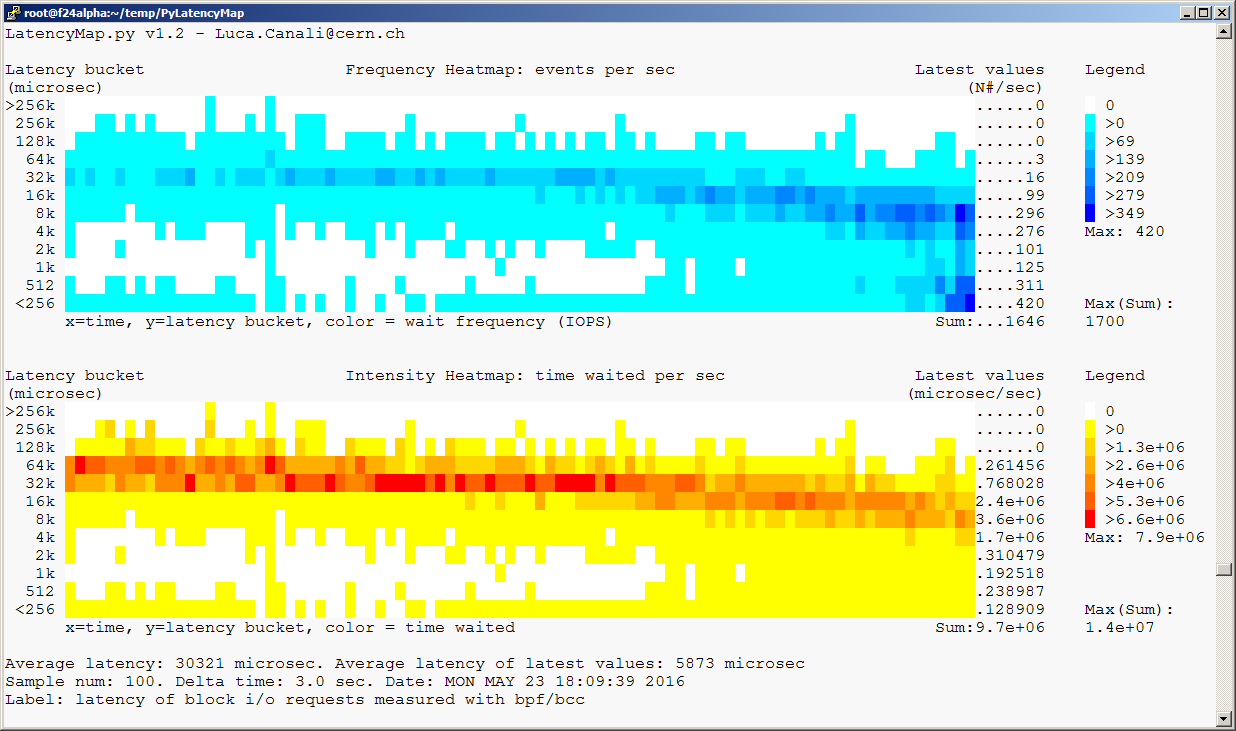 The test workload has been generated using Kevin Closson's SLOB. Additional references with a more detailed discussion of the topic of testing Oracle I/O with SLOB and measuring latency heat maps are:

Heat Map Visualization of I/O Latency with SystemTap and PyLatencyMap and OraLatencyMap v1.1 and Testing I/O with SLOB 2.

Notes on the test environment

The scripts discussed in this post have been developed on Fedora 24 (alpha) running Linux kernel version 4.6 (using the rawhide kernel) and have been tested on workloads generated using Oracle version 11.2.0.4. This is not an Oracle-supported configuration and  the scripts are intended mainly as a demonstration of the technology and for learning purposes.

Here are some pointers on the steps I used to setup a lab environment for testing:

Note in particular the step for configuring the rawhide kernel, probably a good choice when testing BPF, as new features are being added on a regular basis as I write this:
# sudo dnf config-manager --add-repo=http://alt.fedoraproject.org/pub/alt/rawhide-kernel-nodebug/fedora-rawh…
# sudo dnf update
Additional pointers and recipes on how to install Oracle 11.2 on Fedora can be found on Tim Hall's website at: https://oracle-base.com/articles/11g/articles-11g

BPF with its bcc frontend are new and powerful tools for dynamic tracing for Linux. A discussion of the merits and shortfalls of BPF/bcc vs other existing solutions in the Linux dynamic tracing ecosystem is beyond the scope of this post. What you can find in this post are a few example scripts that I have written for tracing Oracle using BPF/bcc and uprobes and an additional script for integrating BPF/bcc with PyLatencyMap, which provides visualization as heat maps of the histograms generated using BPF/bcc.

Although the BPF/bcc environment is currently under evolution, it appears already a very useful addition to the toolbox for troubleshooting and performance investigations of Linux workloads. A set of example scripts/tools that come with the bcc repository are of great help for getting started both with using BPF/bcc and with writing new scripts. BPF/bcc can only run on relatively new kernels (as I write this, I have tested the scripts discussed in this post on kernel version 4.6) and this is an obstacle for its adoption in many environments, at least in the short term.

Many of the original ideas and tools discussed here are inspired or directly derived from the awesome published work of Brendan Gregg.

Many thanks also to the development teams of BPF and bcc for providing and supporting this new powerful tools. In particular thanks to Brenden Blanco for his work on uprobes for bcc and for his support on issue #478.

The work of investigating Oracle userspace with dynamic tracing tools has been done in collaboration with Frits Hoogland.