While working on a data set it is important that it stays easily and quickly accessible. Hibernate second-level caching with Coherence offers applications a resource optimized solution that keeps frequently used data in memory, by distributing it among different application instances, or sharing it with one or more dedicated cache machines. This article describes the knowledge that we gained through using the Oracle Coherence Community Edition for Hibernate second-level caching and gives a general overview of how this product can be used with Java applications running on Kubernetes.

In mid-2020 Oracle released a community edition of their Oracle Coherence product. This open-source product offers an easy way to connect multiple instances together and allows them to form a cluster. The product can be built in as a standard third party module (such as for Hibernate second-level caching) or run as an independent Coherence instance. In the infrastructure it can take one of two roles, it can act either as a cache server or as a client that uses the cache server.

To see how this technical solution would work within our infrastructure and function as a second level cache for Hibernate applications, we decided to test it with a Java application that runs on Kubernetes. For this application, we added Coherence as a dependency package and configured it to act as a client. We spun up the client instances in a Kubernetes cluster (“Application K8s cluster”) and linked them with another Kubernetes cluster where the cache server cluster (“Coherence K8s distributed cache cluster”) was running. Figure 1.1 shows the components used for the evaluation.

Figure 1.1 Component overview of the test use case.

The exercise showed us that Coherence relies on TCP/IP protocol for communication among its member instances. This information is crucial from an infrastructure perspective because it determines what infrastructure components can be used for building a stable production system.

Coherence offers different architecture design and supports a variety of TCP connectors for linking the instances together. Based on our work, we have the following practical advice for use cases when the cache servers and clients are contained in separate Kubernetes clusters:

The direct TCP level based communication aspect also plays an important role when aiming for a highly available cache cluster service. The best Kubernetes design for such community edition clusters is to have a separate Kubernetes cluster for the cache servers where the node machines are in different availability zones. This design will prevent service downtime.

At the time of writing Oracle recommends having a separate Coherence cluster for Hibernate application. This recommendation comes, because Hibernate‘s second-level cache uses a separate cache (Map) for each class of object, which are mapped by Hibernate; and Oracle Coherence replicates these Maps on the cache server side without linking them to an application.. This means that when different applications have the same object class names, errors can arise as one application might not have the same attributes as the other therefore the stored data will end up missing essential information. There is a static workaround for this, which is to dedicate separate cache services in the cache configuration for the different applications and design internal coherence proxy services that are responsible for writing data to the right cache service. The static workaround in this context means that to share a Coherence cluster with a new application using Hibernate, the cache configuration needs editing and the whole cache cluster needs restarting.

Coherence can work with data that is produced by the application or with data that is being retrieved from a database. For implementing a second-level cache for Hibernate, Oracle provides a project named Coherence-hibernate. Since different Hibernate versions have major changes in their second-level cache design, therefore Oracle provides version dedicated modules. The following considerations are important when it comes to making these work (see Figure 2.1 for reference): 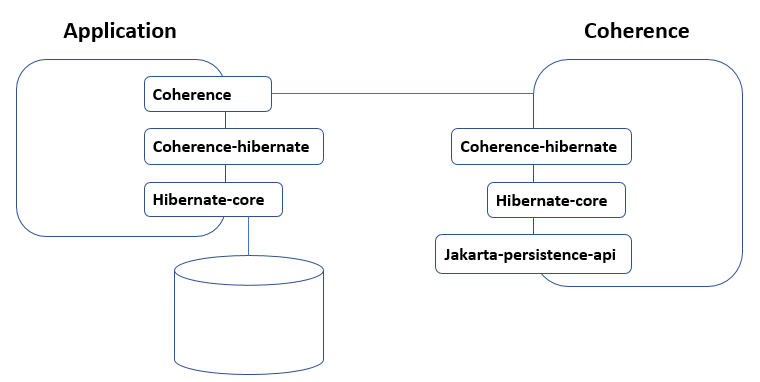 As mentioned earlier Coherence can store not only Hibernate objects, but other custom Java objects as well following a key-value pair cache approach. The latter case is independent of Hibernate and does not require the Coherence-hibernate module. For these custom objects Coherence offers the possibility to fine tune and optimize cache usage and allows object pre-processing on the server side. This can be done using Portable Object Format (POF), which allows for custom objects to diverge from the default Java serialization. It’s important to note that POF objects and cache server side search and aggregation tasks, require custom object definitions on both the server and the client side.

Based on our work, we have identified the following possibilities from a security perspective using the Coherence Community edition:

Oracle provides a Kubernetes operator for Coherence that helps to deploy the Coherence cache cluster in a simple way. The operator supports the deployment of custom Coherence images. It’s important to note that the custom entry points of the image will be disabled on the running instances deployed by the operator. There is a vast amount of information on the Coherence operator page, regarding how to design a custom image and there is also an article on how to run a Coherence cluster in Docker. It is recommended that the operator is used for deploying at least the server side and the Kubernetes service which is used for the cache cluster, because the operator will handle most of the complex configurations.

For production systems, we recommend the use of an Ingress controller that channels the traffic to the Coherence K8s service. This dedicated controller is needed because the communication is on TCP level, therefore there are no HTTP headers which would allow traffic to be shared among different Kubernetes services. For SSL communication, selecting an ingress controller that supports SSL termination and redirecting is essential.

Finally, it’s important to note in regards to configuration, that Coherence loads the default settings first and then overwrites them with custom settings, therefore for the fields that are not defined, default settings will be used.

This article was intended to provide a high-level overview of what can be achieved and what to pay attention to when working with Coherence as a Hibernate second level cache provider using the community edition of Coherence. Starting from architecture design we touched on the possibilities for storing objects, the options available for securing our cache system, what can be used for deploying to Kubernetes and how we might start thinking about configuration. Oracle’s current recommendation is to dedicate one cache cluster for one kind of application to prevent cached object corruption. We discussed that the product uses TCP/IP protocol for communication among its cluster members. We also explained that for production systems the introduction of a proxy server and ingress controller is highly recommended, especially in cases where the client and server are contained within different Kubernetes clusters. Finally, we mentioned that in the selection process for those two components, it’s important to consider TCP level support for traffic forwarding and SSL.

Overall, the community edition of Coherence seems to be a good candidate for large, complex applications that need to keep a substantial amount of data in the application cache. The product allows us to apply data preparation logic on the cache server side, which can simplify and boost business logic execution.